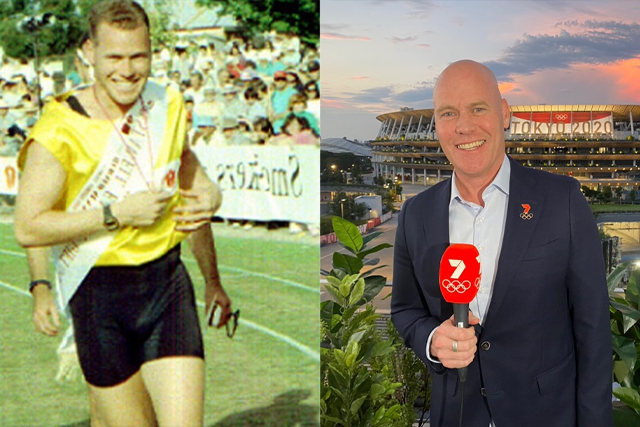 FROM STAWELL TO TOKYO

Back in 1993 a hirsute streak of athleticism going by the name of ‘J.A. Richardson from Caulfield South’ burst through the finish line to win Australia’s richest and most revered foot race – the Stawell Gift. He bookended his Gift win with success in the Stawell ‘Novice’ 100m (1992) and Stawell 120m Backmarkers Invitation race (1994); one of only two athletes in the history of the Stawell Gift to win all three in successive years.

This week, Jason Richardson, or Richo as we all know him now, will commence his key role in Seven’s telecast of the Olympic Games in Tokyo, hosting trackside at the athletics. What an amazing accomplishment for a man who has worked tirelessly through his career to continually improve his skills, his network and ultimately, his accomplishments!

Somewhat surprisingly for someone with a background in an individual sport like athletics, Richo is the ultimate team man. Before he became a media staple, he was the Marketing Director in Australia for the international lifestyle brand, Oakley. His success in leading a corporate team for a such a popular brand gave Jason the confidence to follow his dream of becoming a sports broadcaster, aligning with some of the best commentary teams ever assembled at Seven, and covering a multitude of sports and events including the Rio Olympic Games, the Winter Games in PyeongChang, Seven’s Summer of Cricket, the Australian Open Golf and now, the Tokyo Olympic Games.

Richo’s love of thoroughbred racing has also opened many doors including his current on and off track roles with Seven and Racing.com and a variety of media and MC roles with many of Victoria’s leading race clubs and organisations. He has played key roles in many of Australia’s biggest racing carnival broadcasts, including the Spring and Autumn Carnivals in Melbourne and the Magic Millions Carnival on the Gold Coast. He is now clearly one of the most sought after and respected racing media personalities in Australia.

As Richo prepares for his biggest challenge yet, DSEG is proud to have assisted his development and career opportunities in a field that takes no prisoners. Richo’s knowledge, humour and good nature endear him to a broad audience; traits that will no doubt shine through trackside in Tokyo and hopefully open up many new doors beyond the Games.